Robber Baron Cave has been the site of numerous scientific studies, and Texas Cave Management Association continues to promotes cave and karst research at Robber Baron Cave Preserve. Its location in a major metropolitan area with easy access makes it an ideal site for research. As a karst resource, it has unique geological features and biological species, including endangered species that are found nowhere else.

Some of the scientific studies performed at Robber Baron Cave include: 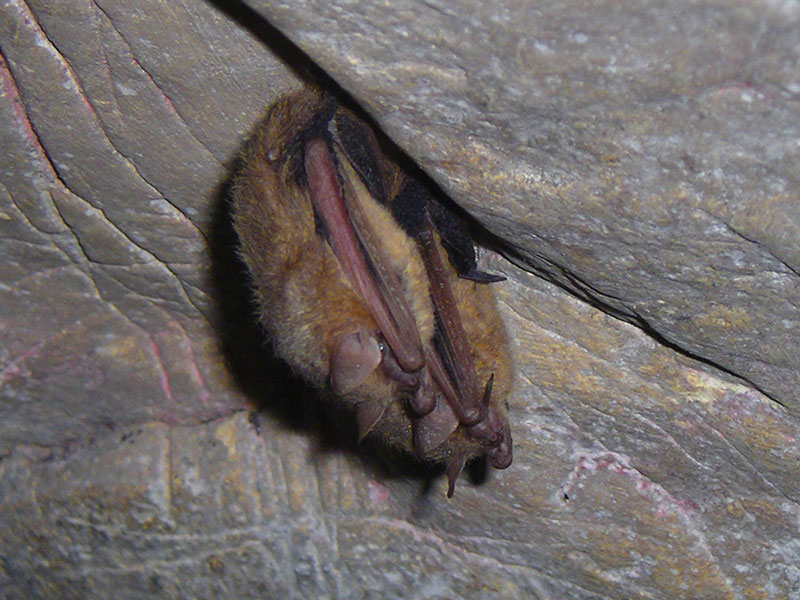 Tricolored bats in the entrance room of Robber Baron Cave.

A large variety of species live in Robber Baron Cave, although most visitors might not notice them. The majority of the species in the cave are invertebrates, but in the last few years an increasing number of tricolored bats (Perimyotis subflavus) have been making the cave their home in the winter. These bats use the cave for hibernation and are known to return to the exact same spot to hibernate year after year.

Examples of invertebrates observed in the cave include:

These species can be largely divided into trogloxene, troglophile, and troglobite. A trogloxene enters a cave just for reasons of food, to escape summer heat, or to hibernate, but does not live there. A troglophile lives a portion of its life in a cave but also lives part of the time above ground. A troglobite, on the other hand, is so well adapted to the underground environment that it is only found in caves and does not survive well on the surface.

In December 2000, two species in Robber Baron Cave were federally listed as Endangered Species (along with seven other troglobite invertebrate species in Bexar County). These are:

Both of these species have been observed only in Robber Baron Cave. They are very small in size, only a couple of millimeters, essentially eyeless, and mostly lacking in pigmentation. These species are well adapted to caves, having a low metabolism due to the lack of food, and long legs for efficient travel and to feel their surroundings. 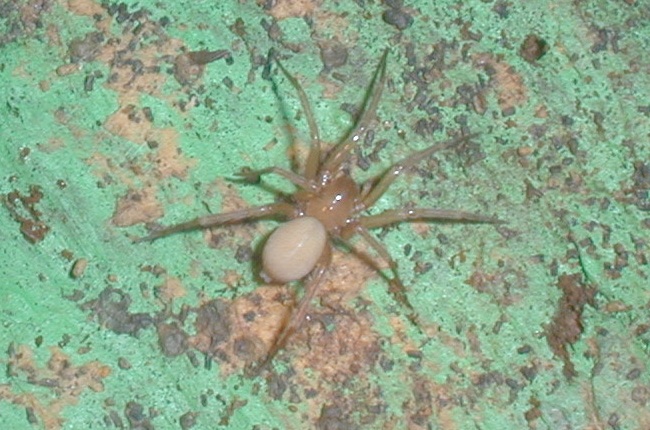 More information about endangered species in the Edwards Aquifer karst can be found here.

Robber Baron Cave is a maze cave with a complex set of interconnected passages that generally intersect at right angles. The cave is found within the Austin Chalk formation, which underlies most of north-central Bexar County. The Austin Chalk is one of the upper confining layers of the Edwards Aquifer and in the location of the cave, is an upthrown fault block. It is a soluble formation, meaning that water flowing through small cracks can, over long stretches of time, dissolve the rock (in contrast to physical erosion). Austin Chalk is also relatively soft and rather clay-like (and less soluble) in its upper layers.

It appears that the cave may have formed in two periods. The first one established the basic layout of passages. A second period followed after the cave opened to the surface, where runoff played a role in enlarging some passages, while partially filling others with sediments. [1] 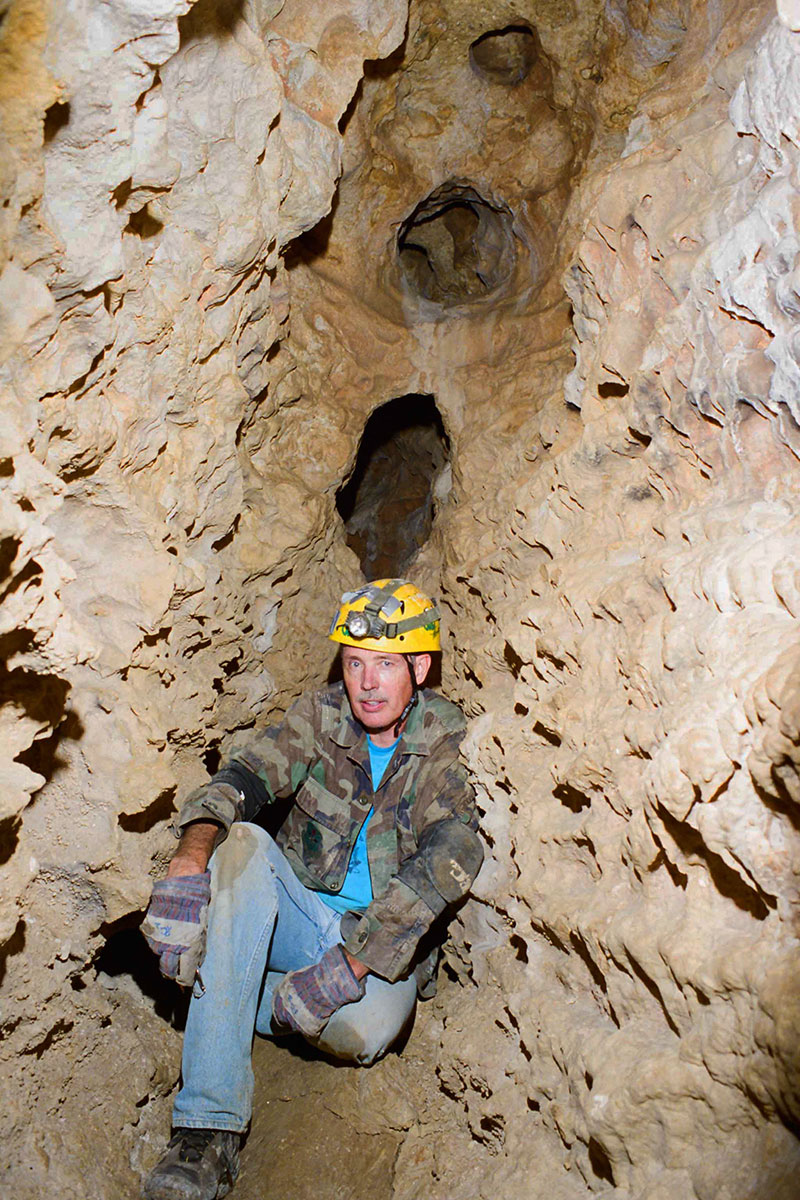 Many features predicted by the hypogene speleogenesis theory are visible in this photo: cupola domes in the ceiling, narrow apertures, and slot-shaped passages. Photo by James Jasek.

There are several theories to explain the origin of the cave (its speleogenesis). One involves aggressive water flow near locations of constrictions in the main flow (floodwater mazes). Another states that slow and dispersed flow through an upper rock layer that is not soluble could form such caves (diffuse recharge). [2] Recently, a new theory has been proposed, known as hypogene speleogenesis, that explains maze caves as a result of ascending ground water. [3] In this theory, water from an underlying aquifer is hydraulically forced up into overlying beds of rock. The water then travels horizontally through fractures in this bed for long distances along multiple paths. If fractures that are differently oriented exist in the overlying bed, the water may be forced up into these and form crossing passages. Characteristic features of this theory are the presence of small orifice-like feeders, which are small rounded “ear canal” like openings in the floors of passages, along with cupolas, which appear as a series of small domes in the ceilings of these passages. Robber Baron was most likely formed by hypogene processes since it has numerous such feeders and cupolas and local conditions make the other theories unlikely. Recent studies have supported this theory with the ancient Edwards Aquifer being the probable source of the rising water about 2.0 to 2.5 million years ago. [4]

Robber Baron Cave maintains a near constant temperature of 71°F. Although this may sound pleasant, the relative humidity is near 100%, which leaves no place for sweat to evaporate. Airflow in this cave, as with most caves, is dependent on local barometric conditions. As air pressure falls (such as from a passing storm) the lower pressure outside will draw air out of the cave causing a breeze in passages toward the entrance. During periods of rising pressure, the reverse is true. Some small passages deep inside the cave also exhibit airflow indicating the presence of cave passages beyond that which are known.

One of the main features of the cave is the presence of significant amounts of carbon dioxide (CO2) at certain times, known as “bad air”. CO2 levels are also driven by barometric pressure changes. High pressure pushes fresh outside air into the cave, while low pressure pulls more CO2 from deeper portions of the cave and allows it to build up. [5] In general, the air quality is better in the winter months when more frequent pressure changes occur from cold fronts. Occasionally, when low pressure dominates for a period of time, some portions of the cave may be problematic to enter as the high CO2 levels can result in extreme shortness of breath, even when not moving, along with dizziness and disorientation (concentrations of more than 12,000 ppm have been measured in the cave.) These symptoms disappear quickly when returning to areas near the entrance (although a headache may remain when CO2 concentrations are especially high). One theory regarding the origin of the CO2 is that it may arise from chemical reactions of surface water with the surrounding rock, or alternatively, that it may be out-gassing from lower rock layers submerged within the aquifer. If this latter hypothesis is true, it would indicate connections to the aquifer in an area not usually considered part of the recharge zone, which has implications for San Antonio’s water quality. A recent study in the cave with a mass spectrometer have also measured similar levels of CO2 along with a corresponding decrease in oxygen (O2) levels. A detection of ammonia (NH3) may also have been made. [6] 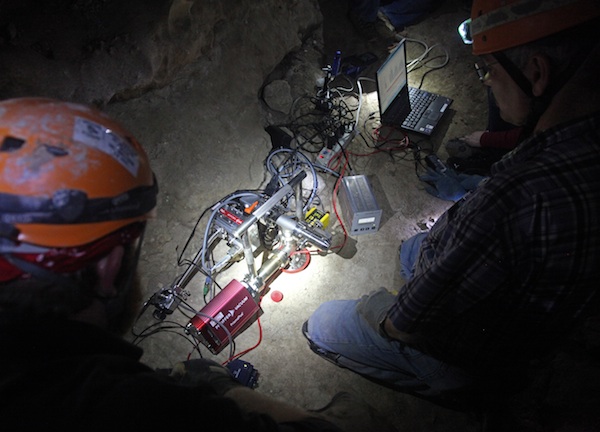